Peruvian Corn: A Rainbow of Taste

Corn is an important part of the Peruvian diet. It is an ancient staple, and a mainstay of many traditional farmers in the Sacred Valley. Different varieties of Peruvian corn are grown throughout the country, from the coast to the highlands.

Like the humble potato, Peru is home to many different varieties of corn, and each one has a different use. From drinks to breads, snacks and desserts, the versatile Peru corn plays a starring role in a variety of popular dishes.

There is a stunning array of corn varieties in Peru. They come in almost every colour you can imagine – yellow, orange, red, white, blue, and a dark purplish, almost black. Here are just a few of our favourites!

Peruvian Corn on the Cob: Choclo!

When served freshly cooked on the cob, corn is called choclo or choclo peruano and is often eaten with fresh cheese. This is not your average corn-on-the-cob, though; choclo kernels are enormous by comparison, so big that you can pick them off to eat, one by one!

The choclo corn kernels are not as sweet as North American sweet corn varieties, but they have a delightful, delicate nutty flavor and a chewy, denser consistency.

The same large-kernelled white or yellow Peruvian corn can also be served loose, rather than on the cob. Dried corn kernels are re-hydrated and boiled until the outer layer starts to come off.

When corn is served in this way it is called mote (pronounced “mo-tay”) and is a very popular snack. Some Peruvians will say the table is not set unless there is a dish of mote on the table!

If that doesn’t seem versatile enough, there is another way that you can find large-kerneled corn in Peru: deep fried!

Colloquially known as the “Inca corn nut,” these salty deep fried treats can be found packaged in most little tiendas and shops, and are a great crispy snack to take on a Sacred Valley day tour or trek!

If you haven’t tried any of these Peru corn snacks, it is a must. There is no better treat in all of the Andes!

Maiz blanco (white corn) and maiz amarillo (yellow corn) are grown throughout Peru, including in the areas surrounding the city of Cusco. White or yellow corn from Peru is used to make chicha de jora, a fermented corn beer consumed by pre-Columbian cultures such as the Inca.

Actually it was considered a sacred beverage in Incan and pre-Incan cultures, and used during ritual ceremonies. It is still very popular today as a refreshing drink, and also continues to be used in ceremonies like pagos a la tierra (tributes to the Earth).

In order to make chicha, you first need to let the corn kernels sprout or germinate. This sprouted corn may first be dried and ground into a flour before being boiled. Finally, the boiled, germinated corn is left to ferment in large ceramic pots, partially buried in the ground. This process goes by the verb chichar.

From start to finish, the whole process for making chicha de jora can take as much as a month. The resulting liquid has a very vaguely corn-like flavor that is somewhat tart and tangy.

It’s definitely an acquired taste, unless you opt for another variety known as frutillada, which is sweetened with strawberry juice or purée.

LEARN HOW to make chicha on our Chichubamba Hands-on Tour!

Did you ever think about drinking juice made from corn??

While typically grown on the coast, maiz morado (literally, “purple corn”) is used to make the sweet, juice-like beverage chicha morada enjoyed all over Peru.

Unlike, its white or yellow counterpart, chicha morada is not fermented and has no alcohol content. It is usually made with pineapple juice, cloves and purple corn, and is great served with a twist of lime!

Peruvian purple corn is also used to make the very popular dessert, mazamorra. Like chicha morada, mazamorra contains a host of fruits, including apricots, plums, and raisins, as well as spices like cinnamon and clove.

This treat has a consistency somewhere between jello and pudding. It is usually served warm alongside a helping by rice pudding, and is considered a great way to warm up on cold nights!

Maiz Chullpi: Another Variety of Corn from Peru

Maiz chullpi has a softer shell and interior than other types of Peru corn. It is very common to see toasted or fried maiz chullpi corn kernels as a side or snack.

Called cancha or canchitas, these delicious toasted corn kernels are often served as snacks in bars to whet the appetite, and can also be seen accompanying the famous Peruvian fish dish known as ceviche.

It might be a challenge to find Peru corn varieties where you live, but if you can find some, there is no shortage of great recipes online that use Peruvian corn.

If you want to really experience maiz chullpi, choclo or any of the other local varieties, you really should come to Peru – especially Cusco! There are many ways you can see and taste Peruvian corn while here:

Want more ideas? Get in touch with one of our Travel Experts! They’ll be happy to help you plan your perfect foodie experience in Cusco. 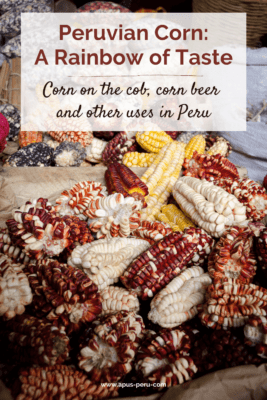 Join us to explore Peru!