Apus Peru > Why Choose Apus Peru? > How Are We A Responsible Travel Company? > We Give Back
“

Every person must decide whether he will walk in the light of creative altruism or the darkness of destructive selfishness. This is the judgment. Life’s most persistent and urgent question is, What are you doing for others?

We have always believed that we need to do more than simply operate responsibly.

In 2009 we went one step further and founded Threads of Peru, a non-profit Peru social enterprise dedicated to providing economic opportunities to indigenous artisans and preserving traditional Quechua culture. Threads of Peru works with associations of weavers, mostly women, in the same communities where Apus Peru operates. The support that Apus Peru and Threads of Peru together bring to these rural Andean communities is community development at its best: diverse economic opportunities for both men and women.

All of our community development and social initiatives are founded on the principle of ayni and are instituted in accordance with Quechua cultural traditions. Our aim is not to change the traditional lifestyle in Quechua communities, but rather to do what we can to fill needs and break down barriers to economic opportunities. Read more about ayni and Quechua culture.

One of the key ways to escape poverty is through education. Sadly, many of the remote indigenous communities located along Apus Peru trekking routes struggle to keep their schools open due to a lack of resources and difficulty in finding teachers willing to relocate there. We decided to do something about this in the community of Chaullacocha after we were approached for help.

Located at a freezing altitude of over 4,500 meters (15,000 feet) above the Patacancha Valley, Chaullacocha is situated in a moon-like, windswept valley. It is a harsh environment where temperatures fall below zero in the afternoons, and little food grows. In the 1990s, the local school was shut down due to terrorism, only reopening in 2006 with 22 students in attendance.

The Sacred Valley-based NGO, RUFADA (Rural Family Development Association), was integral to getting the government to reopen the school. By 2007, numbers had swelled to 29 children, studying in first through 5th grade. Apus Peru began supporting RUFADA and education in Chaullacocha in July of 2007; by December 2008, we began funding and overseeing the project directly. This included hiring a bilingual (Quechua/Spanish) teacher who worked with the youngest of the children. Since the state only provides education in Spanish, and Quechua is the primary language spoken at home in Chaullacocha, the provision of a Quechua-speaking teacher was necessary to enable the children to learn. Moreover, by providing education in Quechua we were able to reinforce positive attitudes towards their Quechua heritage and foster cultural pride.

Our education project in Chaullacocha finished with the successful lobbying for a second teacher paid for by the government through the local Education Management Entity, UGEL (Unidades de Gestión Educativa Local). This teacher began in June, 2010.

Since then, we have continued to help by occasionally connecting the community with other NGOs or the government when needed, acting as a facilitator.

>>Visit Chaullacocha! Hike the Lares to Machu Picchu trek, add a Chaullacocha homestay option, or participate in one of our annual Christmas Chocolatada Treks, and see this amazing community first-hand!

Our aim was to provide a source of income to the women in these communities. International community development studies show that when women receive their own income, the health and well-being of their children improves at a much faster rate than when men control the family’s income.

We believed that if the women could develop a uniform, high standard of weaving, they would be able to compete in the Cusco, Lima and international markets. We also hoped that they would simultaneously develop a sense of pride as they reconnected with their Inca heritage through the weaving tradition, its techniques and iconography. We stopped working with RUFADA and began operating this project on our own starting in January, 2009. This followed a serendipitous visit by a group of Canadian graphic design students from NSCAD (the Nova Scotia College of Art and Design) who wanted to put their creative skills in service to a social cause. Project Peru saw the creation of a professional website – a new platform to market the weavers’ work – and eventually led to the founding of the Peruvian NGO, Threads of Peru.

Threads of Peru continues to support traditional culture and provide economic opportunities for rural indigenous women, with generous support from Apus Peru. It has now grown beyond the original three communities to include 7 communities in 4 different regions of Cusco, supporting a total of about 130 women and their families. Shop Threads of Peru and help support these women and their culture!

You can also learn about the weaving tradition on our 1-day Inca Traditions trek, or one of the weaving tours operated in conjunction with Threads of Peru.

Since late 2008, we have been collecting clothing from visitors to Peru who want to personally give something back to the high Andean communities they’ve visited on their journeys. This includes:

We have a long-term relationship with each of the communities in which we distribute donations, and know how many adults, children and babies live in each one. This helps us to plan the distribution of donations we receive. This is essential for constructive community development. Before any distribution, we talk to the Community President as well as the teachers at the school to get an accurate idea of the community’s present needs.

We make sure that items are distributed in a calm and fair manner that prevents doubling up, and ensures each family receives what they most need.

Although perhaps not “classic” community development work, participating in this annual cultural tradition is an important part of building rapport and earning the trust of the communities we work with.

The chocolatada is a wonderfully unique Christmas tradition in Peru, one that is full of Christmas cheer. Individuals, families and businesses bring a little holiday spirit to those less fortunate by offering hot chocolate, bread or biscocho (a sweet bread with dried fruits traditionally served at Christmas), sweets or even a toy.

We love this tradition and began organizing an annual chocolatada in 2008, bringing chocolate, toys and other gifts to the children in Chaullacocha. You can read more about our Christmas visits in our blog. Our NGO Threads of Peru also helps to spread Christmas cheer to the weaving communities it works with.

>>Want to join us and participate in this is wonderful cultural tradition? Come with us on one of our Christmas Chocolatada Treks! Not going to be here at Christmastime? You can still visit Chaullacocha on the Lares to Machu Picchu trek, or contact us for a custom package. 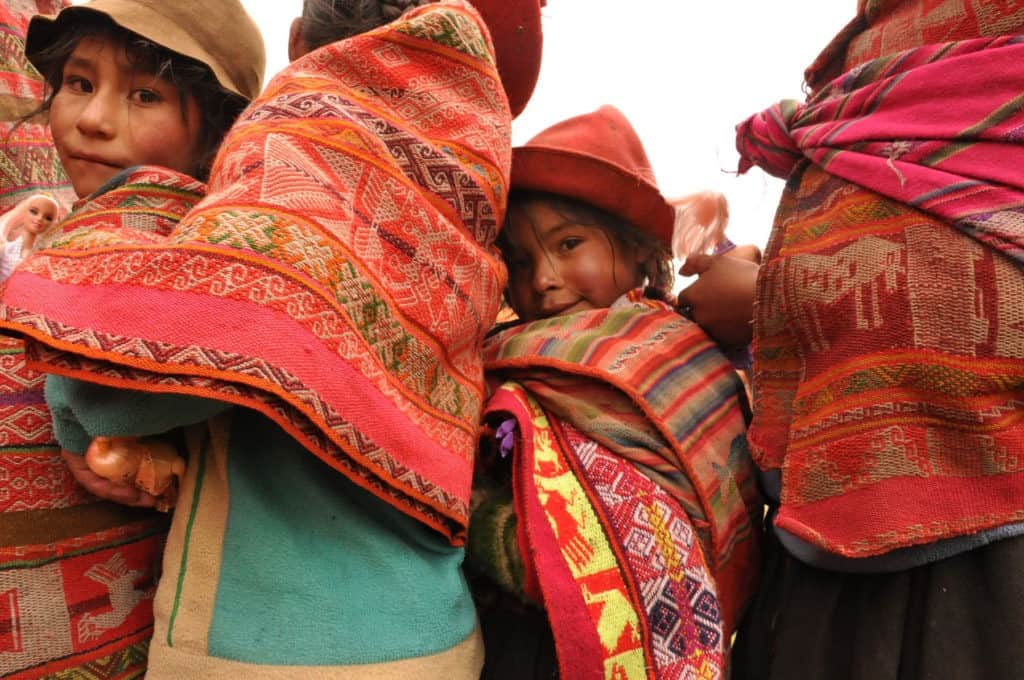 error: Content is protected !!
Join us to explore Peru!