Inti Raymi is the largest ceremony in the southern hemisphere that venerates the Sun during a 9-day celebration. During this festivity, thousands of locals and visitors congregate in the historic centre of Cusco to experience a variety of cultural activities which highlight the importance of the Inca legacy to the continent.

Let’s discover why you should be part of this unique celebration! What is Inti Raymi?

The Festival of the Sun, as it’s also known, is a celebration based on Incan religious beliefs that honours the Sun god Inti and marks the beginning of the Incan New Year and winter solstice. More than 800 performers dressed in Inca attire, take over the Temple of Q’oricancha, Saqsayhuaman archaeological park and the Plaza de Armas of Cusco performing different scenes from Inca history.

The History of Inti Raymi

The Inti Raymi fiesta was established by the Inca Pachacutec in the decade of 1430 AD in the capital of Cusco where the Incas met every winter solstice (on the night of June 23 to 24) to wait for the sunrise.

As the pinnacle of the festival calendar of the ancient Inca, Inti Raymi also symbolized the mythical origins of people from the Andes and their connection with the main leader, the Sapa Inca. During the day’s rituals, the Sapa Inca would enter the big plaza of Saqsayhuaman, walking over a carpet of flower petals and accompanied by a priest that kicked out all evil spirits who wanted to harm the headman or his nobles.

During this ceremony dedicated to the sun, the Incas performed special dances from dawn to dusk using coca leaves and drinking chicha as part of their ritual. During Inca times, more than 40,000 people arrived in Cusco from different regions of the empire to witness the festivity that lasted about 10 days. But why did the Incas congregate in a huge celebration? There were different reasons. First of all, to thank the god Inti for the year’s harvest; secondly for everything given on Earth; and thirdly, to reorganize the empire with cultural subjugation of the conquered communities.

Additionally, Inti Raymi history tells us that the Incas used to meet in the Plaza de Armas to watch the sunrise and toast with chicha. Right after, the natives would embark on a pilgrimage to the Q’oricancha temple to continue with the dances and celebrations. Some historians affirm that the Incas also sacrificed llamas in honour of Inti.

Why Was Inti Raymi Banned?

With the arrival of the Spaniards in Peru, the Incas abandoned their culture, traditions and religion because the Spanish conquerors considered them pagan and even barbaric. The Sapa Inca Atahualpa led the last festival Inti Raymi the year before the Spanish set foot on Peruvian land.

It was in 1572 when the Viceroy Francisco de Toledo prohibited the Inti Raymi festival and forced locals to adopt the Catholic faith. Despite this prohibition, the Incas continued the tradition in secret.

The Renaissance of Inti Raymi

In 1944, thanks to Faustino Espinoza who was a Quechua writer, actor and director, the Cusco’s Inca descendants were able to witness the renaissance of Inti Raymi. He did important research about the origins of the festivity which inspired a vivid recreation of the real festival. In doing so, Espinoza managed to restore the pride and identity of the Quechua people.

Since that time, the festival has become a public event attracting thousands of visitors every year. It became so famous that in 2001 the fiesta of Inti Raymi was declared an integral part of Peru’s cultural patrimony.

Where & When is Inti Raymi Celebrated Today?

Every June 24, tourists flood the capital city of Cusco to take in the day’s celebrations. The events of Inti Raymi Cusco take place in three main spots around the city: the Plaza de Armas, the temple of Q’oricancha and the fortress of Saqsayhuaman. 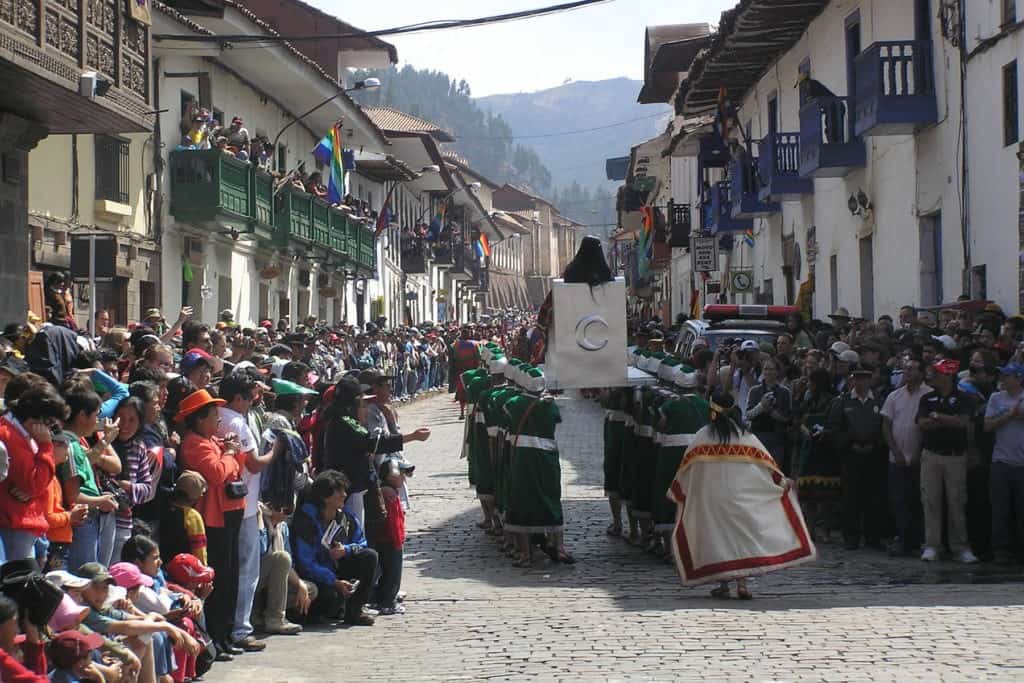 How is Inti Raymi Celebrated?

Now let’s take a look at how the Sun Festival in Peru is prepared. The great ceremony begins at Santo Domingo Church, constructed on top of the Inca Temple of Q’oricancha with performers portraying the royal couple, the Sun King (Sapa Inca) and his wife (Mama Ocllo). Only honoured actors are carefully chosen to be part of the Inti Raymi ritual performance.

The Sun King first appears in the golden garden of Q’oricancha (q’oricancha actually means “golden enclosure” in Quechua!) where he praises the Sun with a ritual of coca leaves while giving an inspiring speech. This ritual usually starts at 9:00 am and finishes at 10:00am.

After this, the entire company of actors dressed in colourful Incan garb form a procession, heading towards the Plaza de Armas. Here, the Inca is lifted onto a litter carried by his servants.

At noon, the King is transported in a golden chariot to the temple of Saqsayhuaman and once the procession arrives there, the Inca leader interacts with the pallbearers who represent three different characters from Inca cosmovision: The Condor, Kuntur, who represents the heavens (hanaq pacha); the Snake, Amaru, who represents the underworld (ukhu pacha); and the Puma that represents life on Earth (kay pacha).

This is also the moment when actors perform a llama sacrifice and its heart is offered to Mother Earth, Pachamama. (Don’t worry, no animals are harmed during the ceremony. The act is part of the Sun Festival performance.) 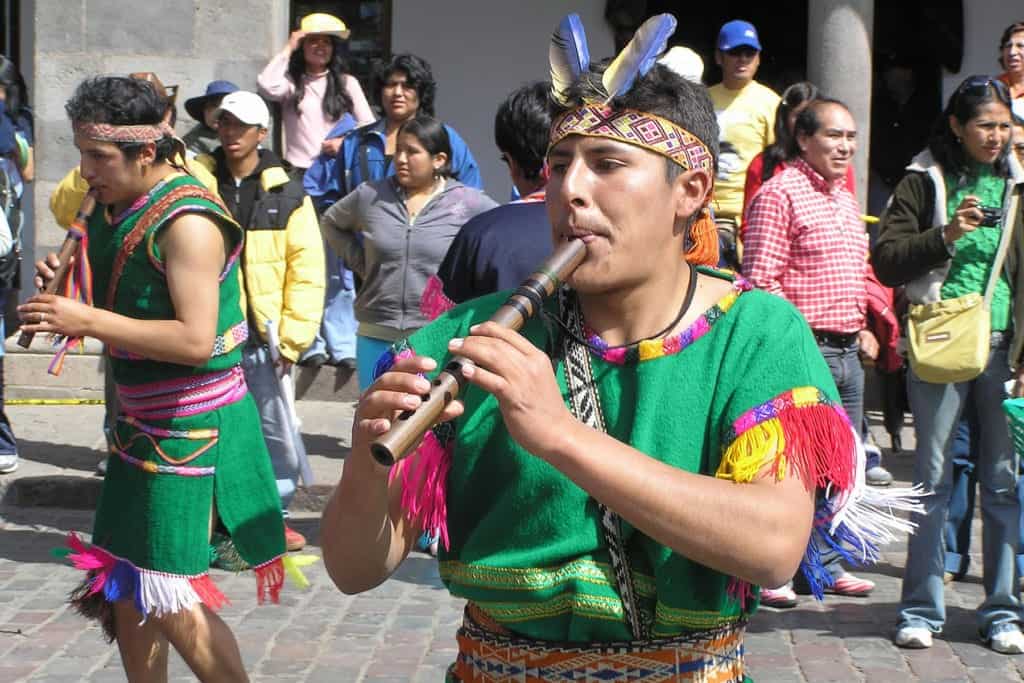 One of the traditions that form part of the Inti Raymi celebration is the fermented corn drink known locally as chicha or chicha de jora. Locals drink chicha in honour of the Inti god, while performing some traditional dances wearing colourful clothes.

The kind of clothing that is used during this Peru festival combines art, tradition and different Incan symbols. Something that draws the attention of locals and most international visitors is the multi-coloured outfits with vibrant accessories such as skirts, jewellery and stone carvings. For instance, the god Inti wears gold jewellery that shines with the light of the sun. In doing so, his presence is clearly noted by all the empire.

During the celebration, artists perform an ancestral ritual called Pampamesa. Participants share typical food of the Andean region such as corn, potatoes and beans combined with meats and the popular cuy (guinea pig). As the food is placed on a traditional tablecloth on the floor where everyone eats together and enjoys, this act is a symbol of community and unity.

The kind of music that is played during the Inti Raymi festival has two similar styles. The first one is better known as San Juan and is characterized by a fast percussion like a heartbeat. The second is San Juanito, a slower beat accompanied by classic guitars.

Visitors will know that the festival is about to finish when they hear the sounds of drums, horns and other instrumental sounds. These sounds conclude Inti Raymi in Peru, and it’s the time when the procession carries the Inti god and his wife back to Cusco. 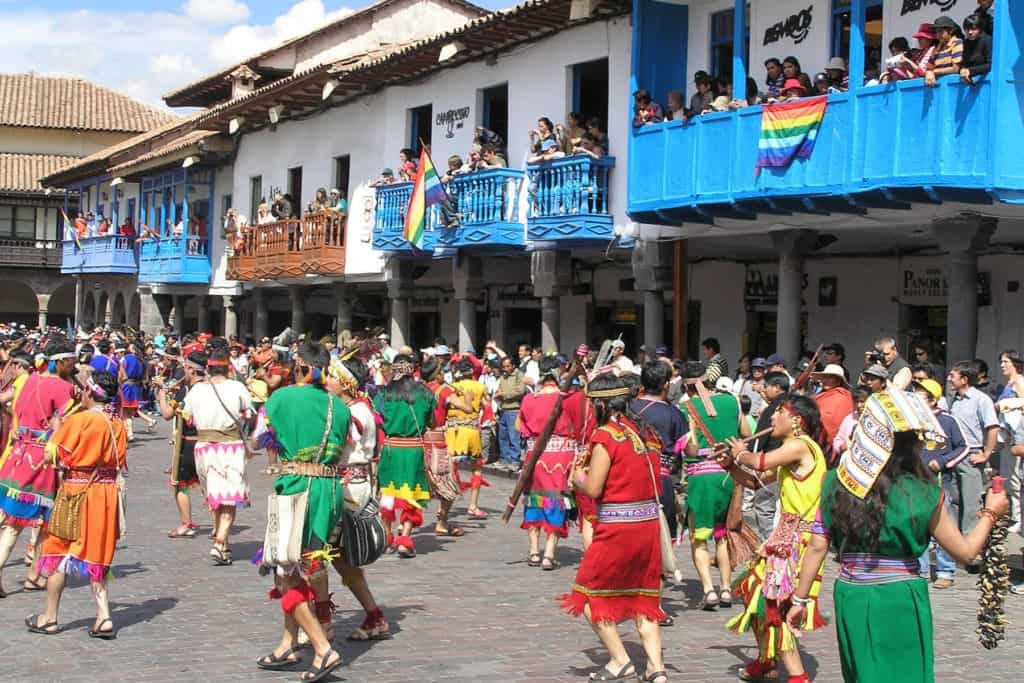 Are you eager to learn more about Peru’s Inti Raymi festival? Here are some quick Inti Raymi facts:

First of all, let’s go over the Inti Raymi pronunciation: in-tee rye-mee. In Quechua, inti raymi literally means “celebration of the sun”. Here are some more Quechua and Spanish words related to the Inti Raymi festival, Peru’s oldest festival. Getting There: How to Watch the Inti Raymi Festival of the Sun

One of the most important celebrations in the Andean festival calendar, and all of Peru, Inti Raymi is actually the culmination of an entire month of festivities in Cusco.

Starting from the very first of June, Cusco’s central plaza is transformed: a statue of Pachacutec covers the famous fountain in the centre of the plaza, colourful rainbow flags representing the city adorn the square, and a grandstand is erected in front of the Cathedral, where concerts and other presentations will be held.

The entire month is filled with celebrations, from offerings to Pachamama, a nighttime concert and fireworks show, and a series of colourful processions. Nearly every day, Avenida Sol and the Plaza de Armas will come alive with parades of colourfully-dressed dancers, performing a series of regional dances.

The Festival of the Sun in Peru is one of those experiences that you never forget. Here’s how to catch the action around the city on the big day, June 24th.

It is important to know that to see the event on this spot, you don’t need tickets. To see the entire show the only place available is on the outskirts of the temple. So, we recommend to arrive early to find a nice spot.

At the Plaza de Armas

Here again, timing is an important factor if you want to see everything that happens in the Plaza de Armas. Since the square closes for performances that will take place, it is best to arrive early and find a good spot.

As an alternative, you can book in advance a seat in one of the bars or restaurants from the square. From those balconies, you will have a privileged view but the cost will be higher during those special days.

To enjoy the mystique of the Incas in the fortress of Saqsayhuaman, you need tickets and you will need to purchase them well in advance. Tickets for Inti Raymi are available online but it is a good idea to buy them at least two months before the event.

The cost of the tickets varies depending on the selected seats, and range from USD 100 to USD 150 – yes, that much! Kids under 12 years old get a special discount. 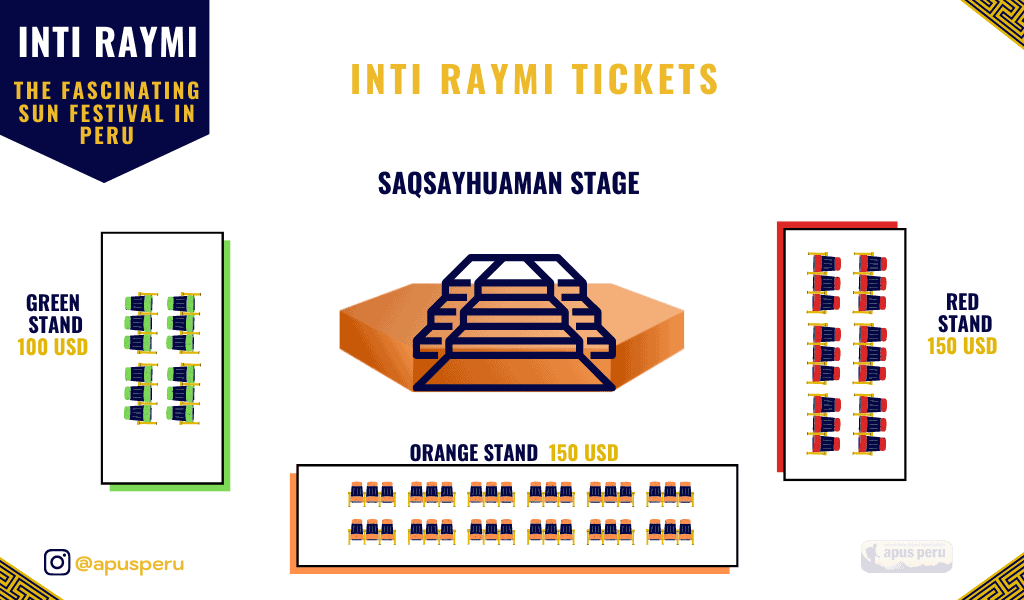 f you don’t want to go on your own, join Apus Peru on a guided tour of Inti Raymi, the famous Peru Sun Festival. Enjoy the entire day of festivities in the company of one of our amazing English-, Spanish-, Quechua-speaking guides who can help interpret the events for you – remember, the event and all of the speeches made by the Sapa Inca are  in Quechua!

Peru is so much more than Machu Picchu! If you want to time your visit to take in Inti Raymi or one of Cusco’s other amazing festivals, check out our Cultural Calendar.

Our quote of the day: "What are men to rocks and m

What was the purpose of the Moray site? 🤔 With

Are you a coffee person? ☕️ From citrus to ch

Imagine getting the first glimpse of the World Won

Why do locals put ceramic bulls on their rooftops

"The trek had an amazing build-up: better and bett