The people of the Andes are known for their weavings: colorful blankets, bright ponchos…and bridges. Yep, you heard that right – bridges!

Rope bridges woven from grass and other traditional materials were commonplace during Incan times in the Andes. Most have been lost over the centuries, but one principal bridge still remains at a place called Qeswachaka. Every June, it is rewoven during a ritual ceremony that takes place over four days, and its completion is celebrated with food and dancing.

What is Qeswachaka, the Last Inca Bridge?

First of all, let’s explore the Qeswachaka meaning. Sometimes spelled Keshwa Chaca or Q’eshuachaca, the name comes from the Quechua words q’eswa which means rope and chaka which means bridge. So Q’eswachaka is literally the rope bridge!

Want some help with the Qeswachaka pronunciation? It’s actually not as hard as it looks! It sounds like this: keh-shwa-cha-ka.

This Inca rope bridge in Peru is one of the most fascinating tourist attractions in Cusco – move over, Inca Trail! It is found in the province of Canas in the department of Cusco at 3700m (12,139 ft). It has a length of 28 meters and is slung 30 meters above the Apurimac River (apurimac in Quechua means “the god who talks”).

Back in the day, the Q’eswachaka bridge was part of the vast network of Inca roads known as Qhapaq Ñan, the Royal Way, which led to the Citadel of Machu Picchu. But this is no ordinary bridge. Each year, the locals remake this Inca grass bridge entirely by hand, using the same techniques that their ancestors used many years ago.

Keep reading for some Inca bridge history, and more about this spectacular feat of engineering!

The History of Inca Rope Bridges in Peru

The Qhapaq Ñan Inca road was vital to holding the great Inca Empire together, with its spread from Colombia in the north to Chile in the south. With the mountains full of rivers and valleys, in some cases the Incas had to cross these chasms by bridge. But what type of bridges did the Inca build? Rope bridges, of course! These bridges were made of grass and traditional materials and were only wide enough for one person to cross at time.

According to the New York Times, at the height of the Incan Empire, there were nearly 200 Inca suspension bridges woven from grass and other traditional materials in the Andes. Only one such bridge remains now: Q’eswachaka, over 100 km from Cusco. Like many of these bridges, this one was destroyed during the Spanish conquest in an attempt to halt Pizarro’s march toward Cusco.

The original Inca bridge was reconstructed many years later and the surrounding communities now maintain the bridge with great enthusiasm. Every June, they gather long blades of grass which are woven into six long cables used in the construction of the bridge. The cables are bound as they would have been in Inca times and are secured to large trunks from eucalyptus trees which are buried deep in the ground at either end of the bridge.

The fibres used in its construction deteriorate rapidly, however, and for this reason it needs to be reconstructed every year. During the Inca Empire there would have been groups of people permanently employed in the maintenance of the bridge. They would also have fought off invasion and monitored who was crossing the bridge.

Qeswachaka: One of Peru’s Most Fascinating Inca Festivals

The reweaving of this Incan suspension bridge (other alternative spellings include Keswachaka, Qeshuachaca, Queswachaca, and Qheswachaka) is celebrated with food, music and dancing. Close to a thousand people (almost all locals) attend the four-day Peru bridge festival.

The annual reconstruction of the Peruvian rope bridge honors their Inca ancestors and takes place in the town of Quehue. About 700 men and women from the communities Huinchiri and Ccollana meet to carry out this cooperative local project.

When Does the Qeswachaka Festival Take Place?

The principal day of the Qeswachaka Inca bridge festival is the second Sunday in June, though preparations for constructing the Incan rope bridge begin three days before the festival itself.

In the three days before the principal day of the festival, people from the nearby villages start cutting the long grasses and other native plants that grow near the bridge site. Once the grasses are collected, they are woven into ropes of varying thickness.

Men and women then work together plaiting and weaving the grasses together to construct the narrow, swinging rope bridge. After three days working on the spectacular Apurimac River bridge, all the communities of Canas province join together in a folkloric festival.

For an interesting look at this tradition through a contemporary lens, check out the documentary, The Bridgemaster’s Daughter. This indie film was released in the summer of 2018.

What to Expect During the Qeswachaka Rope Bridge Festival

At the dawn of the first day – before the festival officially starts – the paqo, the host of the ceremony, celebrates a ritual in favour of the Apus.

The festival then begins when the old rope bridge is cut loose and plummets into the water below.

At the same time, women begin collecting the ichu grass which will be used to build the new bridge. Then they braid the lengths of grass into ropes of various thicknesses.

This is when most of the bridge-building action happens.

The largest and thickest ropes are first strung across the gorge more some 30 meters above the Apurimac River. These will form the base of the new bridge being built. Thinner ropes are used to hold the thicker ones together, and small sticks are woven through the ropes to form a floor. While the women were in charge of weaving the grass ropes, the men are now in charge in securing these ropes to their eucalyptus base at each end.

After two tiring days, the villagers have showcased their engineering prowess on how to build a rope bridge across a canyon!

On the final day, when the bridge is complete, its strength is tested and then the bridge is open to the public. Even though there is a modern metal bridge a few meters upstream, there is large line of people ready to cross the bridge as soon as it opens.

Later in the afternoon, after a Pachamama ceremony where the earth is honored, a cohort of men dressed as traditional Incas descend from a neighboring hill and cross the bridge. Their leader is a shaman. People line the stairs that lead down to the bridge and receive a blessing from the Incan priest. The procession is followed by flag bearers, singing girls, and llamas (who at the last minute might decide they do not want to cross the bridge and walk back up the hill!).

Traditional dancers from the surrounding area and Cusco gather in a nearby field for performances, and vendors sell festival food like baked cuy (guinea pig) and fried trout. Dances, music, and eating last the whole day and the party spills out onto the surrounding hills. Throughout the day there is a line at the bridge. Families take photos and teenagers dangle arms and legs over the sides of the bridge, competing to see who can strike the most daring pose.

Take a look at how the Incan suspension bridge is built!

Getting There: A Once-in-a-Lifetime Adventure

Adventures like Qeswachaka fall into a small category that can truly be described as “once in a lifetime.” Seeing a handmade bridge hung across a steep canyon and then crossing it yourself is an experience that is hard to replicate anywhere else in the world.

Apus Peru offers a full day Qeswachaka tour and many more destinations that are equally engaging and steeped in culture. If you want to check out this swinging bridge festival in 2022 or any other year, find full Qeswachaka Peru tour information here. Or, follow this link to find out more about all of our cultural treks and tours.

Or Go on Your Own!

If you want to enjoy a Qeswachaka rope bridge tour on your own, you can take a public bus from Cusco to the district of Combapata. Once there, take a collective taxi to the town of Quehue where you will find transportation to the festival grounds, about 15 minutes away. The best part? You don’t need a ticket to go! 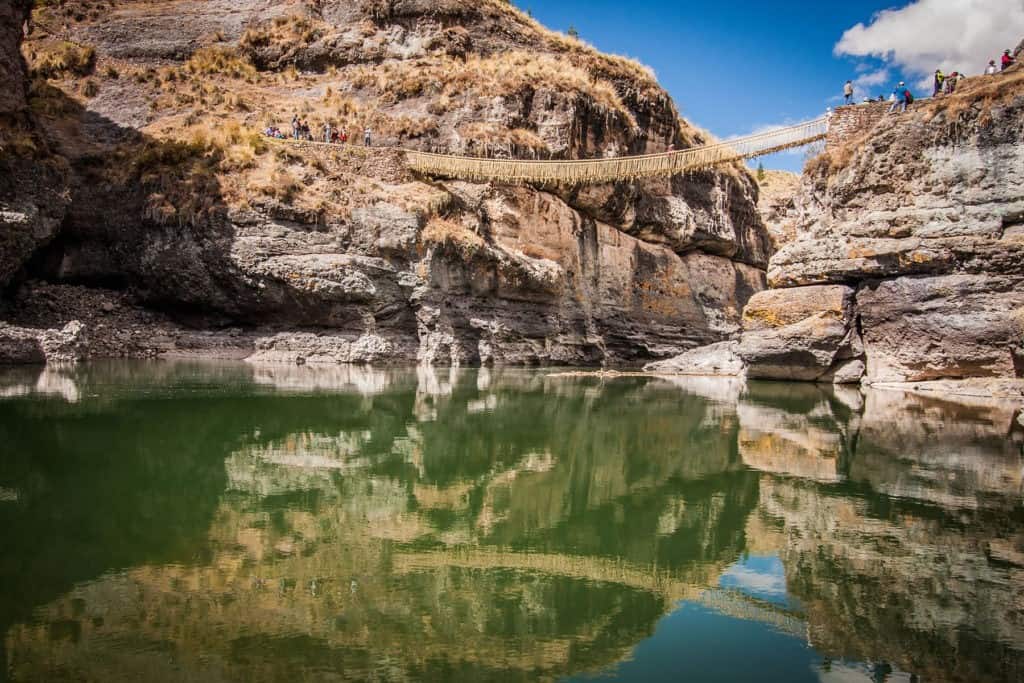 Here are some interesting facts about the Qeswachaka bridge!

Although Q’eswachaka is celebrated as the “last” Inka bridge in Peru, in fact there are a couple of other Inca bridges – include a rope bridge – worth visiting.

The network of roads known as Qhapac Ñan which connected the city of Cusco with the rest of the Inca empire also included stone bridges, floating bridges, oroyas (a sort of pulley system that carried people across the river in a type of basket) and, of course, suspension bridges.

The Inca Bridge at Machu Picchu

Did you know that in Machu Picchu there is an Inka bridge made of wood? To get to the Machu Picchu Inca bridge you must walk approximately 1 hour hiking through a marvellous landscape. Unfortunately, the bridge itself cannot be crossed due to safety reasons.

Read more here about the Machu Picchu bridge hike, Huayna Picchu and all the other hikes you can do at Machu Picchu!

This charming village attracts thousand of visitors who are looking to learn more about Peru history and culture. In Checacupe travellers can visit three bridges from different historical periods: Incan, Colonial and Republican!

You can visit Checacupe on one of our amazing Palccoyo hike tours.

Visit Qeswachaka! One of the Most Fascinating Inca Festivals You Can Witness

If you’re visiting Peru in June, why not include a trip to the Qeswachaka bridge festival in your plans? You will get to witness a celebration that has been passed down through the generations and remains part of the living Inca culture of the Andes. This is the kind of experience that the culturally savvy usually only dream of…!

This article was originally written and photographed by Isaiah Brookshire; it was updated in 2022. Isaiah is a writer, photographer, and globally-focused multimedia storyteller. He is from California and was in Cusco for five months in 2012. While here, Isaiah volunteered with our partner organization Threads of Peru, as well as documented festivals and more for Apus Peru. To learn more about him, visit his website at www.isaiahbrookshire.com.