[email protected] Contact Us
LoginSign Up
Apus Peru > Latest News > Get swinging at a suspension bridge festival in Peru!

One bridge still remains at a place called Qeswachaka (alternate spellings include Q’eswachaka, Keswachaka, Qeshuachaca, Queswachaca, and Qheswachaka). Each June it is rewoven, and its completion is celebrated with food and dancing. This year, close to a thousand people (almost all locals) attended the four day festival.

Preparations for constructing the bridge begin several days before the festival itself. People from nearby villages start cutting the long grasses that grow near the bridge site. Once the grasses are collected, they are woven into ropes of varying thickness.

The festival officially starts when last year’s bridge is cut loose and plummets into the water below. Then the largest and thickest ropes are strung across a gorge more than 10 meters above the Apurimac River. Thinner ropes are used to hold the thicker ones together and small sticks are woven through the ropes to form a floor.

On the final day, when the bridge is complete, its strength is tested and then the bridge is open to the public. Even though there is a modern metal bridge a few meters upstream, there is large line of people ready to cross the bridge as soon as it opens.

Later in the afternoon, after a Pachamama ceremony where the earth is honored, a cohort of men dressed as traditional Incas descend from a neighboring hill and cross the bridge. Their leader is a shaman. People line the stairs that lead down to the bridge and receive a blessing from the Incan priest. The procession is followed by flag bearers, singing girls, and llamas (who at the last minute decided they did not want to cross the bridge and walked back up the hill).

Traditional dancers from the surrounding area and Cusco gather in a nearby field for performances and vendors sell festival food like baked cuy (guinea pig) and fried trout. Dances, music, and eating last the whole day and the party spills out onto the surrounding hills. Throughout the day there is a line at the bridge. Families take photos and teenagers dangle arms and legs over the sides of the bridge; competing to see who can strike the most daring pose.

Adventures like Qeswachaka fall into a small category that can truly be described as “once in a lifetime.” Seeing a handmade bridge hung across a steep canyon and then crossing it yourself is an experience that is hard to replicate anywhere else in the world.

Written and photographed by Isaiah Brookshire. Isaiah is a writer, photographer, and globally focused multimedia storyteller. He is from California and was in Cusco for five months. While here, Isaiah volunteered with our partner organization Threads of Peru, as well as documenting festivals and activities for Apus Peru. To learn more about him, visit his website at www.isaiahbrookshire.com. First published on 24 June 2012; updated on 20 December 2019. 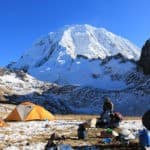 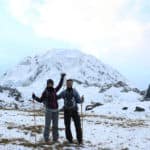 Day by Day on the Ancascocha Trail
22 December, 2019ApusPe22

Load More...
Join us to explore Peru!
error: Content is protected !!
We use cookies to ensure that we give you the best experience on our website. If you continue to use this site we will assume that you are happy with it.Ok