Diane Patterson completed the Choquequirao hike with a group of friends in 2012, and wrote a detailed and beautiful account of her experiences. This is definitely worth a read if you are considering hiking to Choquequirao!  Note, the campsites mentioned are different than those typically used by Apus Peru. Thank you Diane for the story and beautiful photos!

I was very excited to have the opportunity to go on the Classic Choquequirao trek because I had heard a lot about it during my time in Cusco. I was not disappointed. The scenery was breathtaking and the ruins were spectacular – with very few tourists. If I were to do it again the only thing I would change would be to get into better shape, because this is a very difficult trek.

Day 1 of the Choquequirao Hike

We met up very early in order to drive the four hours to Cachora. The winding roads made it difficult to nap, but the scenery is great – you can even see Salkantay Mountain on the way!  Cachora is a very tiny town with only a few paved roads but there were a few shops where we could buy some simple last minute items. We had lunch in a local woman’s house, complete with wandering chickens and guinea pigs in the kitchen.

In the early afternoon we started off on the trek, walking at first through local farms, and then hiking through eucalyptus groves. The climate became drier and drier as we climbed out of the valley. One of the highlights of the day was reaching Capuliyoc where there is a magnificent view of the snow-capped peaks of Padrayoc and Wayna Cachora. We hiked the last half hour in semi-darkness with headlamps. The moon also helped light the way and reflected beautifully off of the Apurimac River far below. Most of the Choquequirao trek is at a lower altitude than Cusco so we were really excited about how warm it was that first night. We even had to leave the outer tent flaps open to cool down! (we kept the netting flap up because of insects.)

Day 2 of the Choquequirao Hike

We woke up very early because we wanted to make as much progress as possible before the afternoon heat started up. After an hour and a half we arrived at Chiccisqa, where we stopped for a water break and to buy a few snacks. The area around Chiccisqa is quite a contrast to the rest of the trail: there is a stream running through it, so lots of plants (including some fruit trees) can grow. After a few minutes’ hike in either direction the scenery turns back into desert/dry forest.

After the break, we continued our descent, the roar of the river below growing louder and louder. An hour from Chiccisqa, we arrived at Playa Rosalinas where we crossed the Apurimac River via the oroya that the local community has installed to replace the bridges that were washed away in landslides earlier this year. I had been nervous about the oroya beforehand, but it turned out to be a lot of fun.

UPDATE: It is no longer necessary to use the oroya to cross the Apurimac River.

Day 2 continued – Across the Apurimac River

After crossing the river we began the hardest climb of the trip: a five hour grueling hike up to the very top of the canyon. The first part of the hike was quite steep and desert-like until Santa Rosa, which is a little oasis filled with avocado, banana and papaya trees. We stopped here for water and snacks, and to reapply sunscreen and bug repellent. Bug repellent is essential on this trek; everyone in my group got bitten even though we were constantly reapplying bug spray.

At this point it had gotten pretty warm, but luckily the edge of the canyon and the plant cover protected us from the worst of the sun. The trail was less steep from Santa Rosa onwards but it was still very challenging. I was overjoyed to finally arrive at Maranpata, our lunch spot and campsite. After lunch some of us took naps while others went on a short hike to a nearby waterfall. In the late afternoon/evening it got pretty cold because Maranpata is located on the top of a large mountain, so we had to put on extra layers.

Day 3 of the Choquequirao Hike

On Day 3 we “slept in” until 6am, and then walked for an hour and a half to the entrance of Choquequirao. Along the way we could see the terraces that make up the lower part of the Choquequirao ruins. We also saw a lot of beautiful orchids on the trail and among the ruins. From the entrance to the ruins, we hiked down for about forty-five minutes to the terraces, which were enormous. It was really foggy and cloudy this morning, making the ruins seem even more mysterious. Next we hiked back up to the main plaza of Choquequirao, which took about an hour. There were very few other tourists so it was easy to imagine that we were the first ones to encounter this ancient Inca city. 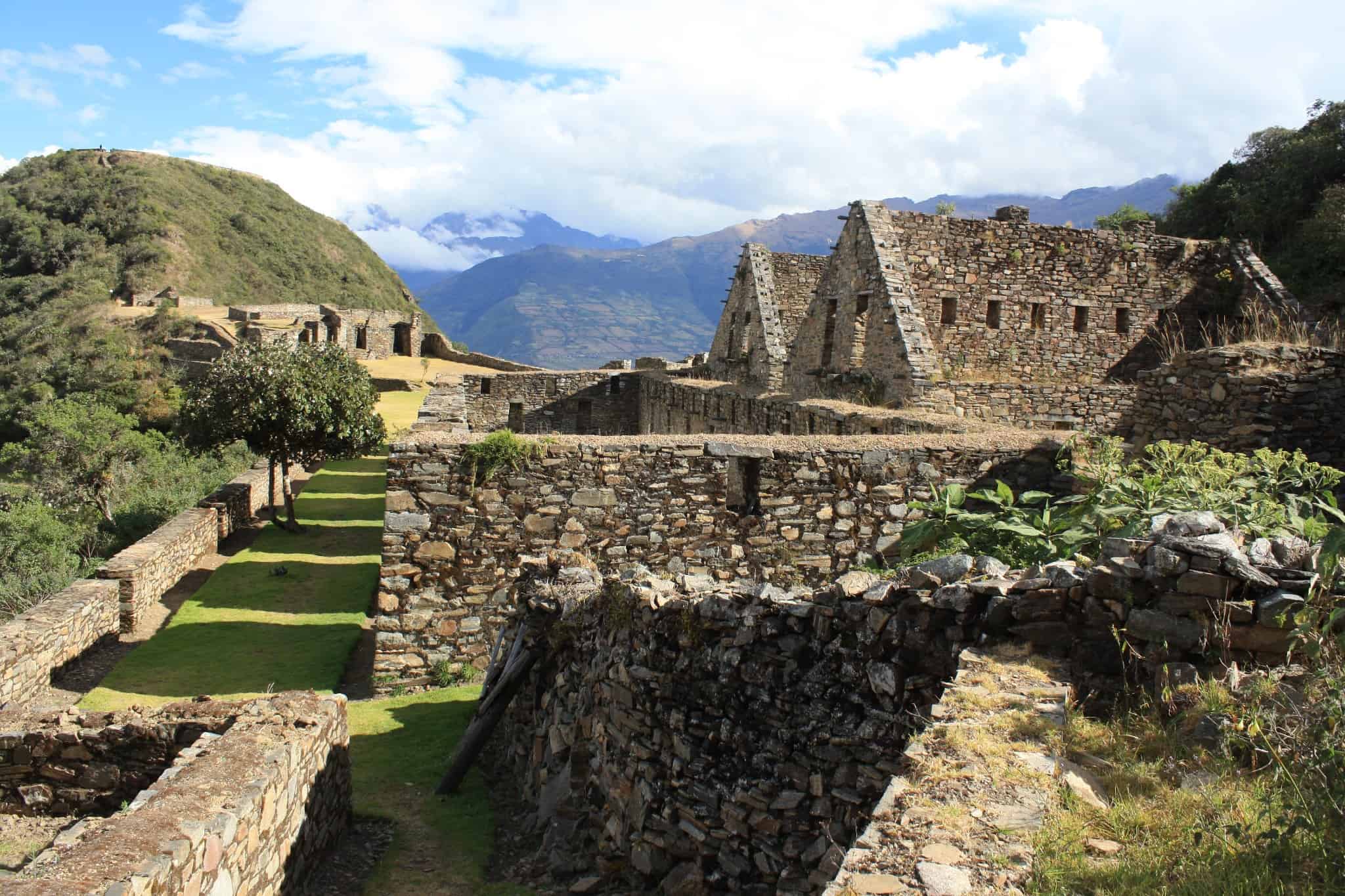 A different view of the very memorable Choquequirao ruins.

We had lunch in the Plaza Principal, then visited the Temples of the Sun and the Moon, workshops, storehouses, terraces for growing medicinal plants, and at the very top, the palace of the Inca. Just outside the house of the Inca are ceremonial baths, which would have flowed throughout the upper ruins in Inca times.

After lunch on Day 3

Then we hiked for about a half an hour down from the Plaza Principal to the llama sector, which was one of my favorite parts of the ruins. It is a series of terraces that have designs of 24 llamas made out of white stones built into them. There are even a couple figures that are baby llamas, and they are all standing in the same direction – supposedly pointing towards Machu Picchu. A friend of mine was disappointed because she thought that we were going to see actual live llamas there.

There is a viewpoint (about ten minutes from the llama sector itself) that you can walk to where you can see the whole array of llamas in the terraces which is definitely worth it. We decided to climb back up to the main plaza via the incredibly steep and narrow staircase built into the terraces. Then we hiked to the mirador of Usnu which has a great view of the complex of ruins below. We were too late to see the condors but it was still worth it. Finally, we hiked back for two hours to Maranpata where we camped for the night.

Day 4 of the Choquequirao Hike

On day 4 we hiked down from Maranpata for 3 hours to the river in the cool of the morning. Then we began the second hardest part of the trek: the 2.5 hour hike from Playa Rosalinas up to Chiccisqa. By this time the sun had reached the bottom of the canyon so it was really hot.

It felt like we were walking into the set of a western movie with all of the cactuses surrounding us, and the heat shimmering off of the trail.

What a relief it was to reach Chiccisqa, where we had lunch and were able to rinse off some of the dirt in the stream that flows through the camp. We also found a passion fruit tree and the fruit we collected from the ground was delicious. We rested until the sun had gone down a bit, and then hiked the remaining two and a half hours back to Cocamasana where we camped for the night

Day 5 of the Choquequirao Hike

On the 5th day of the trek we hiked the remaining two hours switch-backing up to Capuliyoc. It was very foggy this morning and the contrast of the white mist with the yellow/brown grass-covered hills was beautiful. We climbed up a small hill at Capuliyoc that has a spectacular view of the canyon and the trail towards Cachora. We paused for a few minutes to do some meditation, and our guide performed a “pago” ceremony with coca leaves, that was a really nice way to close up the experience.

I was happy not to be climbing anymore after Capuliyoc, but my feet were definitely hurting on the two hour walk back to Cachora. I was elated to arrive and finally take off my hiking boots! After lunch we headed back to Cusco, and on the way we took a detour to the Conoq hot springs. These were a bit of a disappointment because the water was just lukewarm, but it was still refreshing.

READ MORE about the Extras & Extensions you can do on the Choquequirao Trek, including spending an extra day at the ruins (like Diane did), visiting the Conoq hotsprings, or relaxing at the Condor Lodge.

After a 3 hour drive we arrived back in Cusco, exhausted but satisfied at having completed such a challenging trek.

You can follow almost the same hike as Diane by choosing our 4 day Choquequirao hike and adding an Extra Day at the Choquequirao ruins. Diane also added a trip to Conoq hotsprings on the way back to Cusco. See our Trek Extras & Extensions page for more details.

Our quote of the day: "What are men to rocks and m

What was the purpose of the Moray site? 🤔 With

Are you a coffee person? ☕️ From citrus to ch

Imagine getting the first glimpse of the World Won

Why do locals put ceramic bulls on their rooftops

"The trek had an amazing build-up: better and bett